[Research] Communication between collocated players in a shooting game

Games are fun, and they are more fun if played together with others. Multiplayer games typically fall into one of the following 4 categories:When it comes to collaborative game, a lot of communication has to happen so team players are aware of the others' status. Such mutual grounding is crucial to the success in a well thought-out co-op game. This project investigated the ways collocated players communicated with each other during a co-op shooting game, which required timely teamwork. 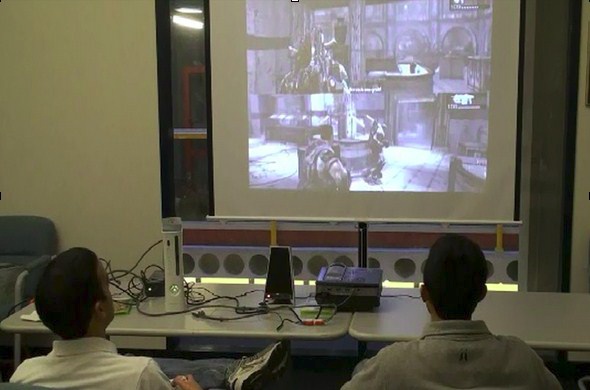 Setup of the study. Two collocated players sat in front of a projected screen and played the co-op mode of two games. They were free to use any method to communicate with each other.
We invited groups of two players to play a short section of two popular shooting games: Call of Duty: Modern Warfare 2 and Gears of War 2. We chose these two games as they used a similar control scheme, and they represented two different kinds of time-critical shooting games: first-person shooters (FPS), and third-person shooters (TPS).

Communication Channels refer to the activities carried out by a player to notify the other. This include: verbally warn the other about an enemy at a certain position, use deliberate movements in the game world to locate items, and physically point to the screen to suggest a route.

Awareness Cues refer to visual and audio bits used by a player to stay aware of what's happening to the other player's avatar. This include: noticing the split-screen of the other player turning red (low health), sounds or utterances made by the other player or their avatar. 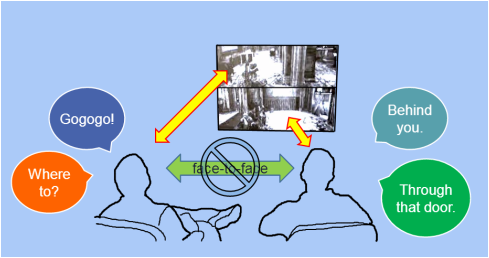 We observed that because of the constant-attention required by the shooting games, players rarely engaged in face-to-face interaction, which was a common way of communication in day-to-day situations. Instead, they used a variety of ways to quickly and succinctly interact. We also observed that in-game cues (e.g., mini-maps, arrows) were crucial in maintaining mutual grounding.

This study was a rather short project (wasn't particularly funded at that time), but was pretty fun. Nowadays with more attention paid towards game design, and company spending big bucks on this form of entertainment, I hope one day we can extend this work in the following directions:
Related publication:
[1] Cheung, V., Chang, Y.-L., Scott, S.D. (2012). Communication Channels and Awareness Cues in Collocated Collaborative Time-Critical Gaming. Proceedings of CSCW 2012: ACM Conference on Computer-Supported Cooperative Work, Seattle, WA, February 11-15, 2012, pp. 569-578.
Powered by