You might have heard about the buzz about Oculus Rift, which originated from a Kickstarter project and have now become a company bought out by Facebook. You might also have read articles or watched videos using this crazy head-mounted device doing amazing VR things. Technology-wise it's not really ground-breaking, essentially it's just a display with some accelerometers attached, so the content can move according to the orientation of the user's head. And because it's being worn over someone's head and thus occupying the person's entire field of view, with stereoscopic rendering a virtual reality can be created.

I've personally tried the Development Kit, and it's pretty good. Display didn't have the resolution good enough, and there were some latency when my head was turning around. But together with the sound it did give me quite an immersive experience. And I think there are some possibilities here. Checking the price it's actually not too bad. But it was sold out and the specs weren't that good anyway. So it made me think: can I just make one for myself?

When you think about it, you'll soon realize your smartphone can almost do everything this device can do: It detects orientation, and has a decently high resolution. The only 2 things missing are the lenses that makes your eyes adjust to the super close display, and a contraption that holds everything together. And it turns out many people have been making those.

There are essentially 2 ways to DIY this device. One is to 3D print all the parts and assemble them. Two is to have some cardboards stuck together. I chose option 2 because it was way cheaper and the materials were much easier to find. The only thing required was a good schematic of the contraption. The simplest I found was from a YouTube user Trevor Walker*, who was kind enough to send me the layout of his design. And with some adjustments to fit the smartphone I was using (HTC One X), I got the basic contraption made from a $3 foam board in a day:
As you can imagine, there weren't a lot of components: contraption, smartphone, and lenses. With the lenses being the hardest to find. It was reported that one can buy that from Ebay under $50. But for me, it happened that my roommate was studying Optometry, and had access to some of those test lenses: 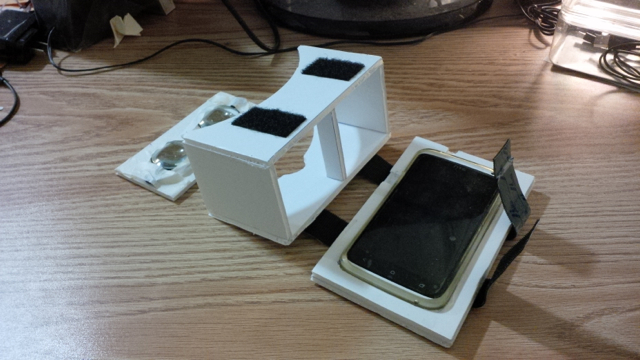 All the components together. The lenses part just slides from the back, and allows slight adjustments.
And so with all things assembled I essentially made my own Oculus Rift, for $3 (excluding the smartphone, and the lenses, I just scavenged the velcro from my lab). The next part was to have some apps that took in the accelerometer readings and displayed content accordingly. Recently there was a German company called Durovis [web] selling contraptions using a person's smartphone, and they also released an SDK and a number of apps. I tried a few of them, they were quite simple, but could sufficiently demonstrate a close resemblance to the real thing. I think what's missing there was the ability to navigate around, as the only thing I could do was to rotate/tilt my head to look around. This usually required a separate controller.

Anyway, it was quite an interesting project, and I might try making some fun apps using the Unity3D SDK provided, if I have time. But a potential improvement of my setup is of course being able to operate hands-free. Here is the idea I have: 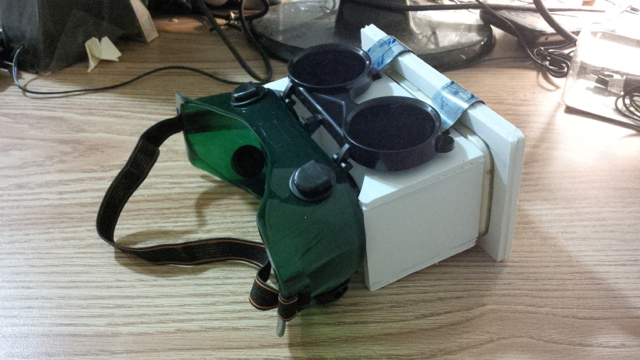 Hands-free setup using a welder's goggle. Costed me less than $5 from Ebay.
Recently some Google developers have also made something similar (Google Cardboard) [web], and have made a few apps at GooglePlay. This however only works for Android phones. I'm currently keeping an eye on something called Altergaze [web], which seems to be a more compact solution, and is very minimalistic -- just the way I like it.
*With the courtesy of Trevor, here is the template that you can use to build your own DIY Oculus Rift [download]. You might have to adjust the dimensions so your smartphone fits.
Powered by