[Development] VR on the Cheap

Some time ago (actually almost 2 years!) I wrote a post [link] talking about making a DIY Oculus Rift after trying the DK1. As years gone by the Rift made it into DK2, which I also tried. The neat thing about DK2, besides the resolution upgrade, was the additional camera unit that you put on a stationary point (typically the top of your monitor), thus allowing translational movements with your head. Another interesting addition was collaboration with the Leap Motion that allowed you to see your hands in the VR world.
This was a really cool concept, as HCI researchers will tell you without seeing one's hands or other representation of self, it's very dis-orienting. Plus head movements can only take you so far in interacting with the virtual world, both in terms of duration and accuracy. So adding hand representations with them being able to actually interact with stuff in the virtual world was definitely the right way to go.

Now we have the HTC Vive and the consumer version of the Rift. Both of these two VR contraptions feature an extra set of joysticks that work like controllers, with their spatial locations tracked along with the headset. What you get is a really immersive experience where you move in a 3D virtual space and do stuff with the controllers. I am really impressed.

But those are research equipment that I don't own. So what can I make that gives me the closest experience... with least amount of work?

The answer is Google Cardboard + a game controller. 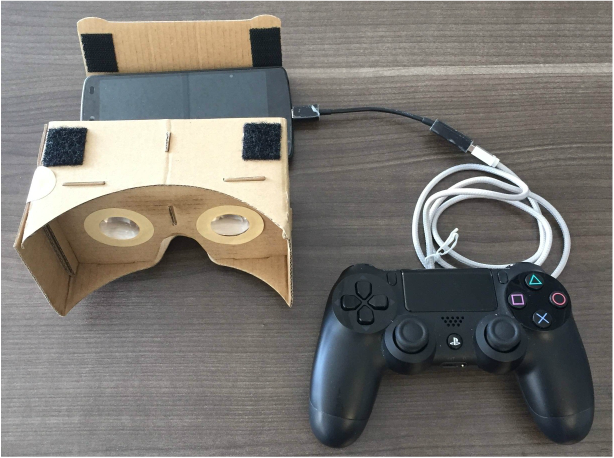 Google Cardboard knock-off ($5), used Nexus5 ($150), OTG adapter ($10), USB cable ($10), used PS4 controller ($40). Head strap not shown here.
Here are the things that makes the whole setup work:
Then the software side. It's easier than you think.
Now the development part. Surprisingly simple. Really, all you need to do is drag the GvrMain prefab under the GoogleVR>Prefabs folder to the scene. This will create all the necessary stuff you need, from the scripts creating a split camera view, to those that read the accelerometer data from your phone to rotate the camera view. If all you want is for yourself to look around, you are basically done. Just build and run and put the setup to your face.

In my case it was a bit more involved. I was making a flying robot controlled by the gamepad. In fact most of my time was just to map the controller keys/axes to the movements of the robot as a rigidbody in Unity. Anyone who has some experience in making games using gamepads would have done it better than me, as there was actually no difference in terms of scripting. But once I was done I just made the GvrMain prefab as a child of the robot, and when played it moved with the robot as if I was flying in it.

The only wrinkle I had was that the keys/axes mapping of the PS4 controller in Unity was different between PC and Android. So I had to make two bindings in order to be able to test the game in PC and play it on Android. Not a big deal, but something worth noting. 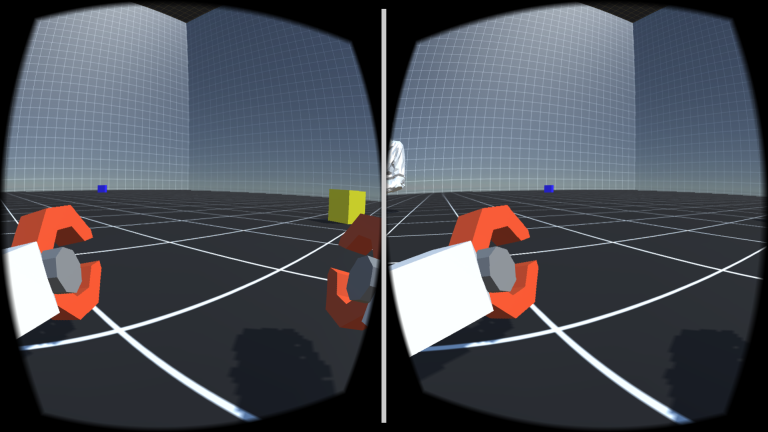 Screenshot of the flying robot app I made in a few hours using Unity 3D and the provided package.
Some useful tips in making a VR app on Android with Unity (ver5.3.0).

Overall I'm quite happy with this setup, especially with the amount of control I have using a gamepad. It really adds another level of immersiveness in the VR. The fact that Unity 3D is by itself a 3D game world development tool makes the process almost trivial. You can literally drag a prefab and make any 3D game into a VR game. There is of course some trade-offs in terms of resolution and processing power, but phones these days can do a lot of things, and they could only get better. As a quick demo, this is the way to go.
Powered by